Home  ::  Ontology Structure  ::  Adjective Noun Pairs  ::  Applications  ::  Downloads  ::  About
We present a novel approach towards sentiment analysis based on the semantic understanding of visual content. To reseach this goal, we automatically construct a large-scale ontology of semantic concepts, each selected based on the following criteria: (1) reflect a strong sentiment, (2) have a link to an emotion, (3) be frequently used and (4) has reasonable detection accuracy.

The construction procedure is illustrated on the right: the process is founded on psychological research such as Plutchik's Wheel of Emotions, a well established psychological model of emotions. First for each of the given 24 emotions defined in Plutchik's theory we retrieve images and videos from Flickr and YouTube respectively to extract their distinct tags (e.g., joy leads to happy, beautiful, and flower).

These tags are then analyzed used to form adjective noun combinations or adjective noun pairs (ANP) such as beautiful flower reflecting a strong positive sentiment or bloody zombie reflecting a strong negative sentiment. Those ANPs are then ranked by their frequency on Flickr and sampled to form a broad and comprehensive ontology containing more than 3,000 ANP concepts. 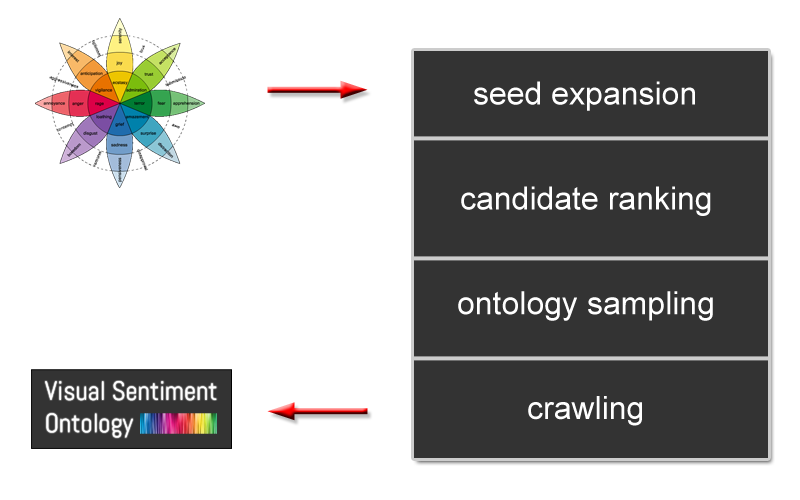